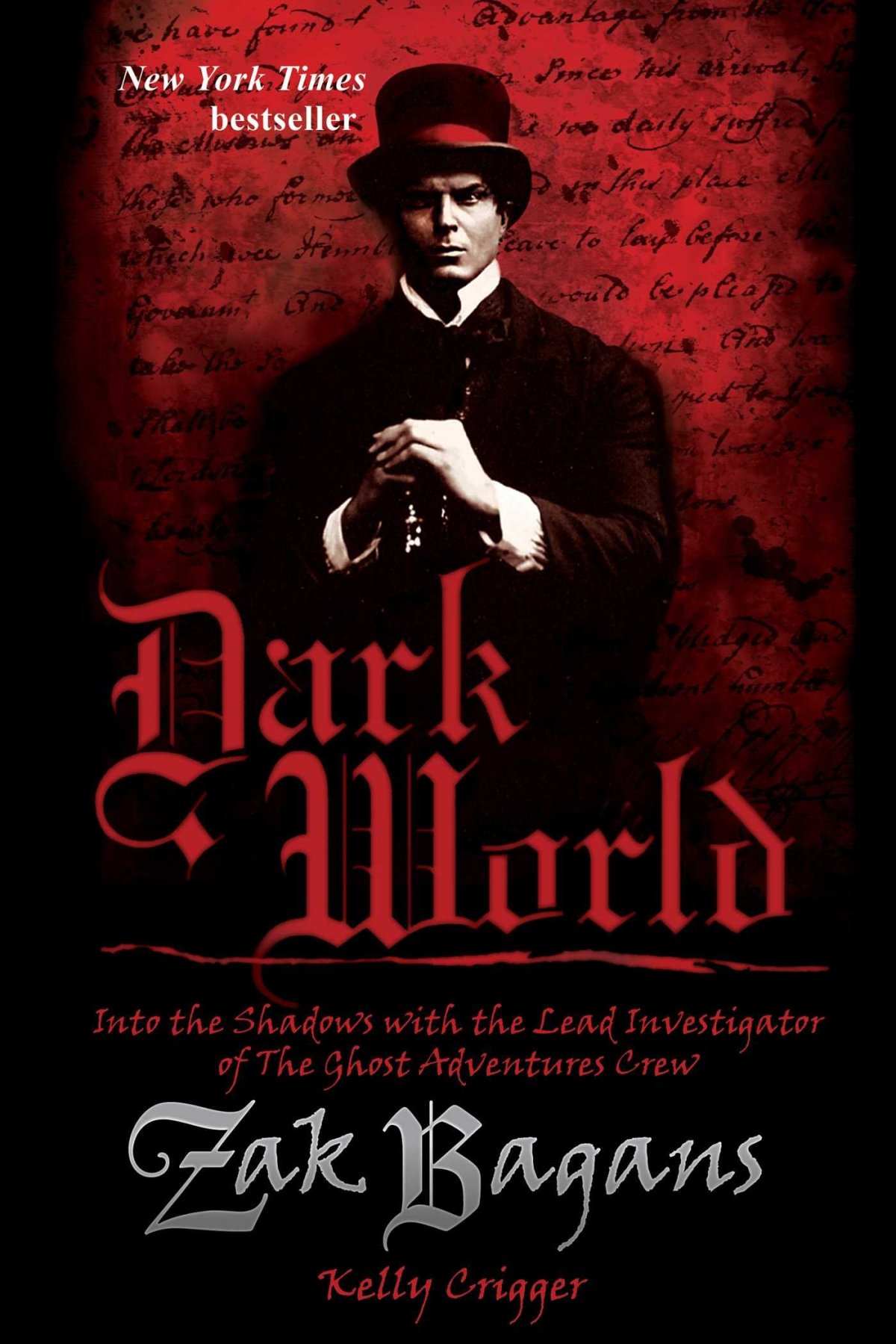 Dark World: Into the Shadows with the Lead Investigator of The Ghost Adventures Crew

Barry’s score 4 stars out of 5

Product description:
It’s easy to say ghosts exist or don’t exist. Anyone can do that. Trying to figure out the why or what is a different story. Paranormal investigator Zak Bagans, host of the popular Travel Channel series Ghost Adventures, pulls from his years of experience with paranormal activities and unexplained phenomena to provide an evenhanded look at a divisive subject. In Dark World, regardless of whether you believe in the afterlife or not, Zak does his best to find and share answers to the phenomena that people encounter. He wants you to experience a haunting through his eyes: to feel what it’s like to be scared, freaked out, pushed, cold, sluggish, whispered-at and touched by an ethereal being or attacked by a demonic spirit. But beyond simply experiencing these events, Zak is looking for the reasons behind them, searching for answers to the unanswered questions. Addressing all the major issues and theories of the field in an impartial way, Dark World is a must read for paranormal enthusiasts, those who don’t believe and anyone who’s ever wondered about things that go bump in the night.

This is one of those books that I could score a 5 just as easily as a 3. It’s a bit like nailing down jello. On the one hand, Dark World: Into the Shadows with the Lead Investigator of The Ghost Adventures Crew

smacks of an exercise in narcissism. I almost expected to see Zak Bagans name larger than anything else of the cover ( and it nearly is ). I am reminded of a story related to me by a ghost hunter, that I greatly respect, in which one of Zak’s interviewees told her about Zak’s constant preening. While there is a lot of ego flexing in the book, I couldn’t help but come away impressed with Bagans’ knowledge of paranormal tools and techniques.

If the book were solely about paranormal techniques, strategy, or tools,  I think that it would have been a better book. While I may not agree with everything in his approach, I am impressed with his energy and passion.

I think that more behind-the-scenes anecdotes and less retelling of episodes would have helped the book. Sometimes it is a little difficult to take Bagans seriously.  That being said, I would recommend the book and give it a wishy-washy 4 stars out of 5. 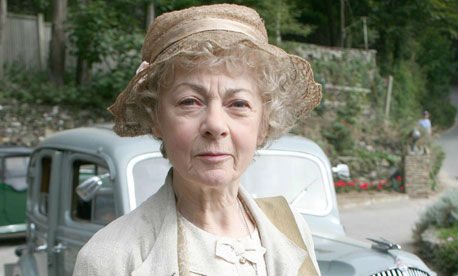 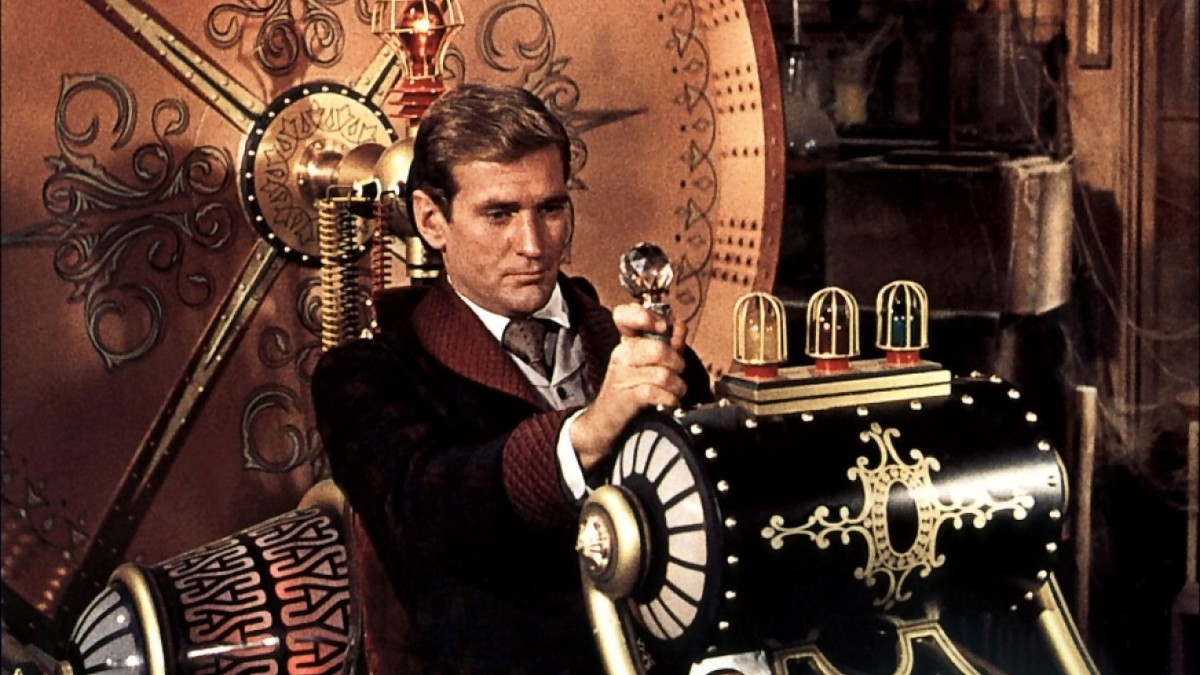 As a child, I loved the movie “The Time Machine”. That movie fueled a lifelong love of, what is now called, Steampunk. 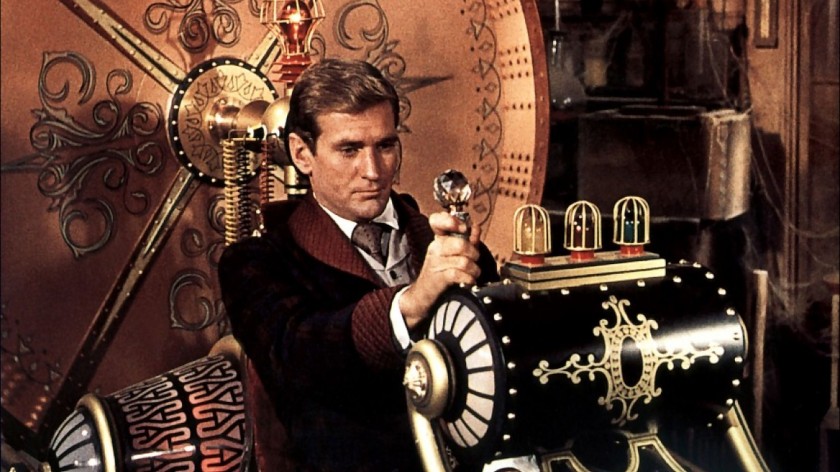 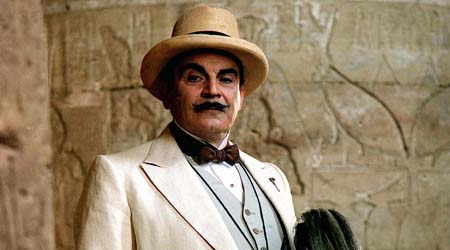 Like many of you, I was introduced to Agatha Christie’s Hercule Poirot at a very early age. While I was a big Sherlock Holmes fan, I couldn’t help but find certain mystery detectives intriguing and Christie’s detectives were the best.

Fortunately, I stumbled across Poirot, played by David Suchet, on Netflix this week and spent an afternoon binge-watching the series. While I remembered the story of “Death on the Nile” and remembered the solution, I couldn’t help but find myself caught up in the mystery with the excellent acting, costumes, and scenery. By the way, most of the movie/episode was shot in Egypt.

A bitter and heartbroken Jacqueline De Bellefort (Emma Griffiths Malin) stalks her ex-fiancé, Simon Doyle (JJ Feild) and his new wife Linnet Ridgeway (Emily Blunt), on their honeymoon to Egypt. It is no mystery what is going to happen. Through in the usual suspects that one finds in an Agatha Christie mystery add alcohol, guns, sex, and revenge, add a twist — voila — a marvelous mystery in an exotic locale.

If you are looking for a fun period mystery, I think anything from Suchet’s Poirot series should do the trick. However, if you want something special try “Death on the Nile”.

It’s a wet, yet oddly warm, morning in December. Not your usual type of day for this time of the year.  I’d like to try a little something different for Mondays by briefly chatting about the latest period mystery that I watched.   This week I thought that I would talk about the series Murdoch Mysteries and the episode “Snakes and Ladders”.

If you are unfamiliar with the Murdoch Mysteries, it is a Canadian mystery series set in the early 20th Century staring Yannick Bisson as William Murdoch. Murdoch Mysteries is in it’s eighth season, and the series is based on the novels by Maureen Jennings.

As a lover of steampunk, I greatly enjoy some of the scientific approaches, that a 21st Century person would recognize, used to solve some  of Murdoch’s intriguing mysteries. It is perhaps the steampunckiest show on TV today though not strictly steampunk.

In the episode  “Snakes and Ladders”,  Murdoch tangles with (perhaps?) Jack the Ripper. I liked the major clue in the form of “finger marks” (fingerprinting). The show ended with a couple of nice twists that were quite satisfying.

All in all, I really enjoy the series. Sadly, Murdoch Mysteries can be a little difficult to find in the States. The CW plays the series on Sunday afternoon in my area and it can be found on Netflix. Of course, the books are available through Amazon.

Cauldron, floating candles, and train, I love it. 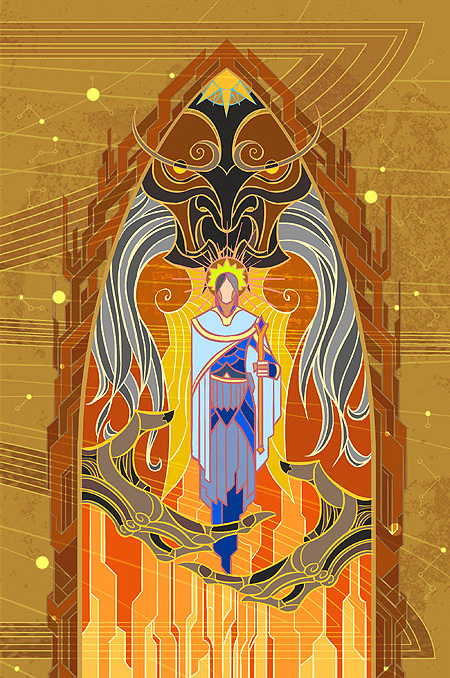 It was all that I could do to crawl out of bed this morning. It’s chilly for Florida with the temperature in the 40’s. Once out of bed, I guzzled coffee and continued my sedentary morning. On one of those trips to the coffee pot, Peppy got excited. I thought that he needed a walk, but as it turned out he was excited to see me walking around. 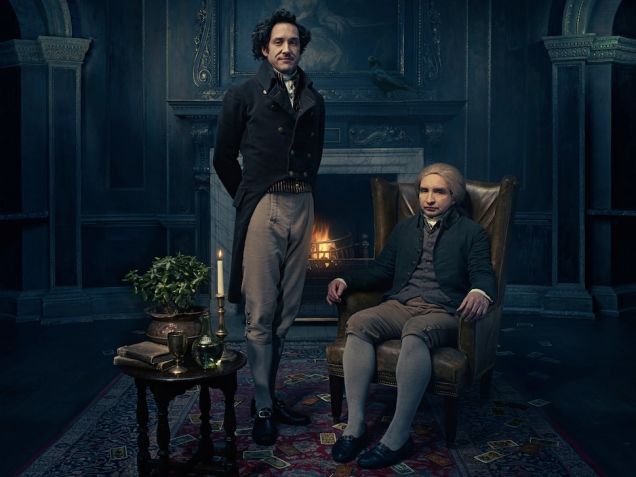 I’ve always wanted the excuse to read the Jonathan Strange & Mr Norrell story and, now, I can catch the tale on TV. The BBC has adapted the book into a mini-series to play sometime in 2015. The story are set in the nineteenth Century with a man, Mr Norrell, who uses magic to benefit the government in it’s battle against Napoleon.

If you want a head-start on the series check out —

At the dawn of the nineteenth century, two very different magicians emerge to change England’s history. In the year 1806, with the Napoleonic Wars raging on land and sea, most people believe magic to be long dead in England–until the reclusive Mr Norrell reveals his powers, and becomes a celebrity overnight.

Soon, another practicing magician comes forth: the young, handsome, and daring Jonathan Strange. He becomes Norrell’s student, and they join forces in the war against France. But Strange is increasingly drawn to the wildest, most perilous forms of magic, straining his partnership with Norrell, and putting at risk everything else he holds dear. 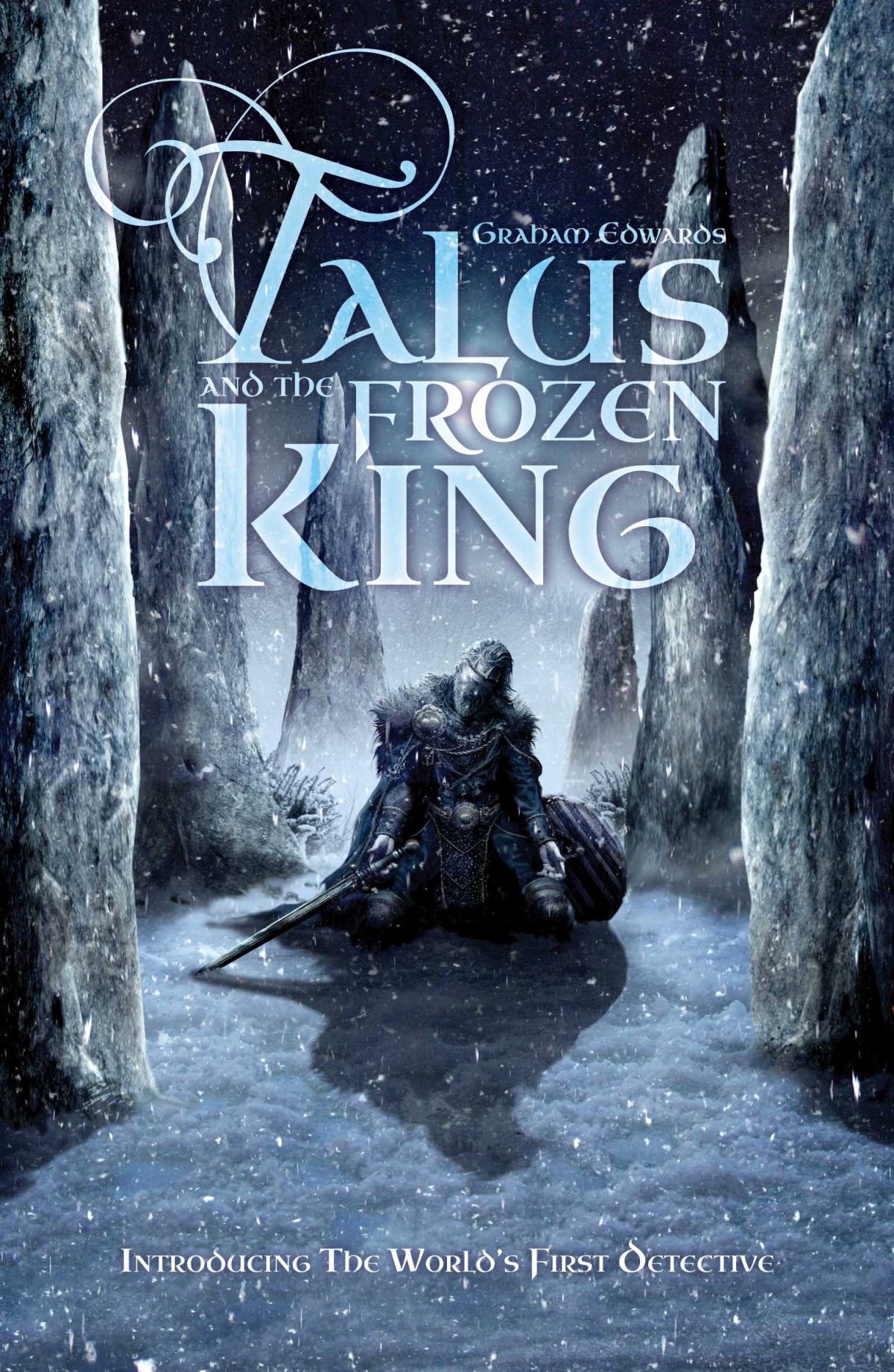 Talus and the Frozen King

Barry’s score 4 stars out of 5

A dead warrior king frozen in winter ice. Six grieving sons, each with his own reason to kill. Two weary travelers caught up in a web of suspicion and deceit.

A dead warrior king frozen in winter ice. Six grieving sons, each with his own reason to kill. Two weary travelers caught up in a web of suspicion and deceit.
In a distant time long before our own, wandering bard Talus and his companion Bran journey to the island realm of Creyak, where the king has been murdered. From clues scattered among the island’s mysterious barrows and stone circles, they begin their search for his killer. But do the answers lie in this world or the next?
Nobody is above suspicion, from the king’s heir to the tribal shaman, from the servant woman steeped in herb-lore to the visiting warlord whose unexpected arrival throws the whole tribe into confusion. And when death strikes again, Talus and Bran realize nothing is what it seems.
Creyak is place of secrets and spirits, mystery and myth. It will take a clever man indeed to unravel the truth. The kind of man this ancient world has not seen before.

Talus and the Frozen King is a fast paced murder mystery set in the Neolithic era. It has a bit of a Sherlock Holmes vibe to it, although, it reminded me more of Mel Starr’s Hugh de Singleton series. Like Starr, Edwards crafts a fine story wrapped in an extremely accurate feeling Historical era.

All in all, I found it to be an entertaining read. Having said that, many of the elements in the story; desolate area, near xenophobic locals, and red herrings are familiar to mystery fans. Still, I think that both History buffs and mystery fans will enjoy it. I give Talus and the Frozen King 4 stars out of 5.

Disclosure of Material Connection: I received this ebook free from Solaris www.solarisbooks.com  . I was not required to write a positive review. The opinions I have expressed are my own. I am disclosing this in accordance with the Federal Trade Commission’s 16 CFR, Part 255 : “Guides Concerning the Use of Endorsements and Testimonials in Advertising.”