The Osiris Curse: A Tweed & Nightingale Adventure
by Paul Crilley 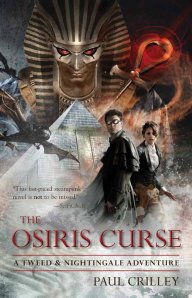 Available at Amazon
The Osiris Curse: A Tweed & Nightingale Adventure

Clearly, The Osiris Curse: A Tweed & Nightingale Adventure is targeted at the younger teenage crowd and should make a good stocking-stuffer this Christmas for the young steampunk enthusiast.  Even this 55 year-old enjoyed portions of this book.

It was a pleasant read that made me feel a little nostalgic for Scooby Doo.  I imagine that I would have loved this book at age 10.  The Osiris Curse: A Tweed & Nightingale Adventure has some cute ideas and dialogue.

I give The Osiris Curse: A Tweed & Nightingale Adventure 3 stars out of 5 and recommend it for the kids.

When Nikola Tesla is murdered and blueprints for his super weapons are stolen, Tweed and Nightingale are drawn into a global cat and mouse chase with his killers. What’s more, it seems that the people who shot Nikola Tesla are the same people responsible for Octavia’s mother’s disappearance. As the two cases intertwine, Tweed and Nightingale’s investigations lead them to a murdered archeologist and a secret society called The Hermetic Order of Osiris. Fleeing the cult’s wrath, they go undercover on the luxury airship, The Albion, setting out on her maiden voyage to Tutankhamen’s View, a five star hotel built in the hollowed-out and refurbished Great Pyramid of Giza.

In Egypt, the duo begin to unravel the terrible truth behind Tesla’s death, a secret so earth-shattering that if revealed it would mean rewriting the entire history of the world. But if the cult’s plans aren’t stopped, Britain may lose the future.

Disclosure of Material Connection: I received this book free from Pyr. I was not required to write a positive review. The opinions I have expressed are my own. I am disclosing this in accordance with the Federal Trade Commission’s 16 CFR, Part 255 : “Guides Concerning the Use of Endorsements and Testimonials in Advertising.”

I was saddened to learn that Ripper Street has been cancelled.

Period crime drama Ripper Street has been axed by the BBC after it failed to pull in a big enough audience.

The occasionally grisly Victorian-era show will end when the second series winds up in just under a fortnight on BBC One.

I can’t help but think that the show could have made it given more time.